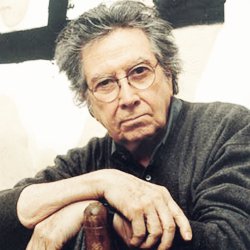 Antonio Tàpies starts his artistic trials during the long convalescence of a serious illness. The growing dedication to drawing and painting pushes him to abandon university studies. In the 1940s he already exhibits his works, with a marked personality, which stand out in the artistic panorama of the moment.

Parallel to his artistic activity, Antoni Tàpies has developed a work as a writer that has led to several publications: The practice of art, Art against aesthetics, Personal Memory, The reality as art, For a modern and progressive art, Value of art, Art and its places. Antoni Tàpies created the Fundació Antoni Tàpies in 1984 with the aim of promoting the study and knowledge of contemporary art, paying special attention to the analysis of its role in the formation of the conscience of modern man.