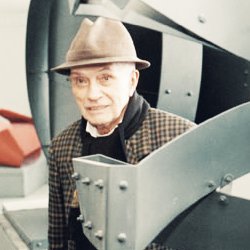 The Colombian sculptor, Edgar Negret, is one of the most outstanding representatives of modern Colombian sculpture. He studied at the School of Fine Arts of Cali, specializing in sculpture. In 1973 he opened his Casa Negret gallery, creating in the mid-1980s his own museum in a family building in his hometown.

Negret has been awarded numerous awards for his professional career as the Order of the Congress of the Republic of Colombia in Official grade granted by President Armando Benedetti, he has also received the Andrés Bello Order Decoration, Caracas and has been awarded Best Foreign Artist in Arco Madrid.