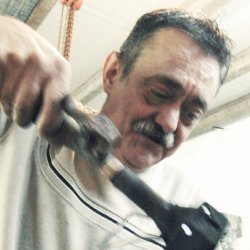 Iñaki Olazabal Eceiza began his sculptural training in 1983 in the workshop of Sorabilla directed by Xabier Laka, a sculptor who promoted the pedagogical and sculptural ideology of Oteiza. Olazabal continued his education in Germany at the Kunstakademie school in Düsseldorf between 1991 and 1993, where he acquired a more self-critical position but with the desire to shape the postulate of social sculpture. Far from being interested in a dematerializing tendency, Olazabal reaffirms the emphasis of his pieces for a phenomenological experience of them.