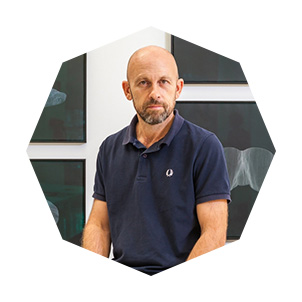 He graduated in 1991 from Fine Arts from the University of the Basque Country, specialized in Painting. In 1993 he left painting to dedicate to his own 3D Animation company. He later on moved to Barcelona in 1999 and in 2007 he returned to the art practice through drawing. Ten years later he began to dedicate himself to engraving through which his ability to draw and line can be appreciated, a characteristic aspect of his work. The artist states:

To draw, I put as a condition that all the marks made are visible and no corrections are made. I apply a system in which a first line prefigures the back line and if an irregularity occurs, it is transmitted on the next line. Similar processes occur in nature so that these a posteriori drawing connect with familiar patterns and shapes such as surfaces, tissues, fluids, orography, waves, etc. The basic idea for drawing is not to represent something but to activate a process.