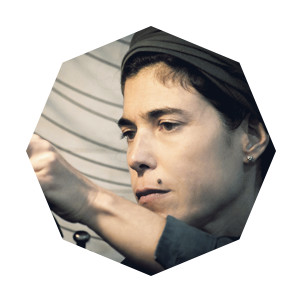 She started her professional career as a PR at the age of 18, for her interest in cultural studies. But since her childhood, the interest in humanistic sciences competes with her love of aesthetics, art works and designs that she develops in a self-taught way during all her university years. In 2000 she studies Design in Buenos Aires and starts her career as an independent designer working on different projects. At the end of the year 2013, she moves to Uruguay where she dedicates exclusively to art. Participates in the workshops of Casa Berro, then studies at José María Pelayo atelier. She takes online contemporary art, history and curatorship courses. In 2017 begins the course for plastic arts workshops in Taller Malvin.

She currently exhibits her works in galleries of the Barra, Punta del Este and José Ignacio. In 2015, she participates in Alliance Françoise at Montevideo call and she is chosen to exhibit her ""Tribute to Music"", which is later presented at the Argentine Consulate in Punta del Este. One of her works is exhibited at Carrasco International Airport, and another one travels to France's most important art fair on the Louvre Carousel in October 2016. In 2017, she is invited to participate in the New York Art Fair, where she is represented by a French art gallery.