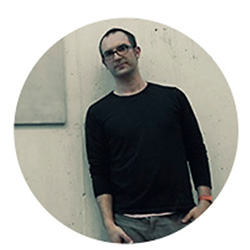 «Telling stories is an essential activity for the human being. I do it through drawings and paintings. I try to tell stories that communicate with those who observe them and invite them to be transported to different spaces, without greater sound in their form and aesthetics. Over the years I have developed my own way of expressing ideas through a type of personal figuration where I have enriched myself with various influences. A world of unique characters that despite their schematics give off tenderness and kindness. I consider my style to be simple, defined, fresh and harmonious as a whole. I admit being influenced by comics, by illustration (Saul Steimber, Tomi Ungerer, Isidro Ferrer, Fernando Khran, Quino, El Roto, Mordillo), by the work of Dubuffet, Fraile, Philip Guston; and also by some street artists like Basquiat or Keith Haring, a very free art, just like when children create ».

Moisés Yagües has shown his work in contemporary art fairs such as ArtMadrid, JustMad and Estampa (Spain), Chaco (Chile), Artelisboa (Portugal), AAF Hamburg / London / Brussels, among others. He has exhibited in galleries in Spain, Germany, the US and Japan. His work has received various awards such as the 1st Prize for Young Creators of the National Calcography, the Corzón Prize at the XVI National Prizes for Engraving in Marbella, the 2nd International Carmen Arozena Prize, among others. His work has been selected for biennials such as XXVIII Biennial of Graphic Art of Ljublljana (Slovenia), IEEB5 of Bucharest (Romania), Münsterlandfestival pArt.3 Lüdinghausen (Germany), among others.