THE MOROCCO FACES, BY LEILA ALAOUI

THE MOROCCO FACES, BY LEILA ALAOUI

Although much of the program has already finished, PhotoEspaña still has exhibitions to offer. We recommend that you take advantage of these last days to enjoy some excellent showings. We highlight the work of Leila Alaoui, which can be seen in the Arab House until September 22nd. 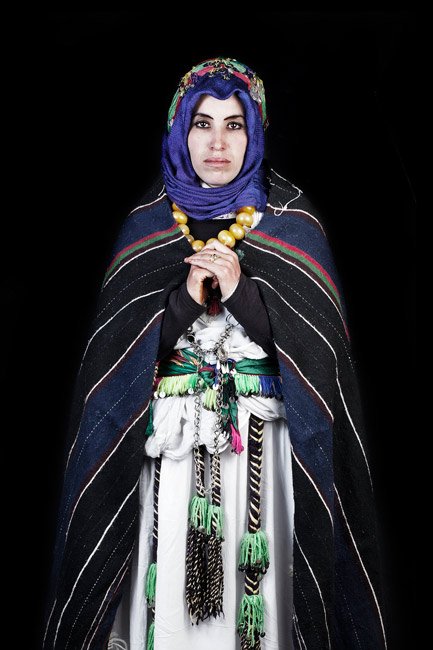 The exhibition "The Moroccans" has been organised thanks to the collaboration of the Embassy of the Kingdom of Morocco and the Leila Alaoui Foundation. It puts together 30 stunning portraits that the photographer made between 2010 and 2014, within a personal project in which she tried to reflect the reality of her country and the power of the look of the individual. Fleeing from the traditional image that pays attention to the contextual elements, she sought to capture the essence of the person and, at the same time, to reflect the details of a way of life, of culture and traditions condensed in the chosen outfit and clothing.

This project could not be understood without knowing part of the life of the Franco-Moroccan photographer. Leila was born in Paris but spent her childhood and youth in Marrakech. At that time, her imagination was feeding on the persistent stories of emigrants that seek a better life venturing through the Mediterranean and the tragedy associated with these forced trips, often frustrated and risky. With the passing of the years and her inclination towards photography, Leila saw in this artistic discipline the possibility of generating a discourse of social awareness that would allow her to bring to light many of the stories she had heard as a child and that still were, in the 21st century, entirely common.

Fully focused on social photography, her work has mostly been developed in the North African countries of the Mediterranean basin. With diverse themes that seek a sort of social justice through the image, her narrative has dealt with emigration, refugee movements, women's inequality, interculturality or national identity. One of her characteristic techniques was to set up an improvised photography studio in the street and invite anyone who wanted to be portrayed. Many of her projects have had the selfless collaboration of numerous citizens, attracted by her equal speech and proximity.

In "The Moroccans", an exhibition curated by the writer and critic Guillaume de Sardes, the humanistic and committed nature of Leila's work is evident. Her photographs want to be the voice of many who have no chance to speak. Her portraits are direct, genuine encounters with people who openly look at the camera to hardly offer their faces surrounded by traditional fabrics. Each look invites us to reconstruct a personal story, but at the same time shared by all of them, which tells us about a common history.

Unfortunately, Leila Alaoui died in 2016 after an attack in Ouagadougou (Burkina Faso), a city where she was working on a project proposed by Amnesty International on the status of women. Her work visits our country for the first time in a beautiful tribute to her social commitment and her talent as a photographer.